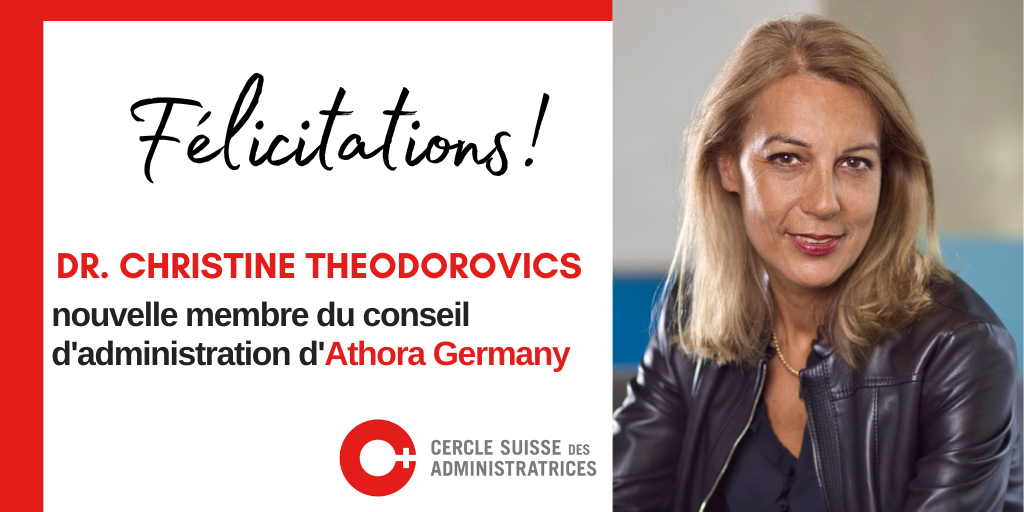 The Cercle Suisse des Administratrices is proud to announce member Christine Theodorovics has joined Athora Germany as Independent Board Member.

Athora Germany, part of the Athora Holding Ltd., a leading European savings and retirement services group, focuses on efficiently managing its closed book portfolio of traditional life, unit-linked and pension policies. In 2022 it was announced that it had agreed to acquire a closed book portfolio of the former DBV-Winterthur Life (DWL) from AXA Germany. Athora Germany will have €24 billion of AuA and 1.1 million customers subject to closing expected by the end 2023. Athora Germany’s regulated businesses are subject to regulatory supervision by the German Federal Financial Supervisory Authority (BaFin).

Dr. Christine Theodorovics is a seasoned professional, who served on executive and non executive boards in eight countries. She has been in the finance industry for more than 20 years, both in insurance and banking in many different roles. Whilst having acted as CEO with end to end responsibilities she was driving transformation programs and digitalisation initiatives. The more recent focus of Ms Theodorovics’ career were non executive board memberships in several countries and pan-European initiatives in digitalisation of distribution, life insurance, ESG, new ways of working, as well as diversity & inclusion initiatives, where she acted as founder and sponsor.